Story behind the photo - London

Since moving over here, I've taken a LOT of photos. I have no idea of the number, but I'm fairly sure it would number in the thousands.

In an attempt to record some of the things that I've seen (and hopefully not forget what all my photos were of), I'm going to do a Story behind the photo post each week. I have my photos sorted into folders by location, and the folders are in date order on my computer. So, I'm going to work my way through one folder each week, select a photo (using this website), post it, and write what I remember about it.

Without any further ado..... 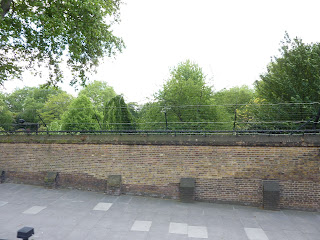 I had to really think what this is actually a photo of. When my friends and I arrived in London (at about 7 in the morning), we checked into the hotel we were staying at, wandered the area, and did a double-decker bus tour of London. There are a couple of companies that do them (as far as I know they cover a very similar route), we went with The Original Tour. This photo (I'm almost 100% fairly kind of sure) was taken as we were driving past Buckingham Palace. It doesn't look like much.....I'm sure I had a reason for taking it at the time. I do know, it wasn't until several months later, that I discovered you could actually tour part of Buckingham Palace in the summer months....
Posted by a girl from oz at 21:33

Email ThisBlogThis!Share to TwitterShare to FacebookShare to Pinterest
Labels: London, photography, story behind the photo, UK