with my mum and sister.

I wish I was there (or anywhere, really) with them right now.

Most of the time, I'm truly grateful to be living in England. I know that I'm incredibly fortunate to be living this life, seeing and experiencing things that most people only dream of (and I get told that on a regular basis). But, right at this moment, some face-to-face, in-the-same-room-and-able-to-touch-each-other-contact with my family would feel incredible.

Story behind the photo - Vienna 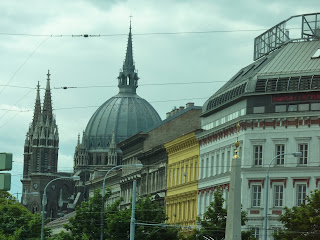 It is a bit less than 2 years since this photo was taken, and I cannot honestly remember what it was a photo of. I know the photo was taken in Vienna, and, based off where it is filed in that particular photo folder, my guess would be it was taken on the bus as we drove out of the city. But, apart from that.......I don't have an interesting story behind the photo to share........sorry.
Posted by a girl from oz at 20:17 No comments:

I've been living in England for almost two years now. You would think that, coming from a country with quite strong ties to 'the mother country,' people could understand the words/phrases that I use and things that I do....right?

Since I arrived here, there have been a few things I've said/done that have made people go 'huh?!?!?' The current list includes:

That's all I can think of for now. For however long I remain living here, I'm sure other things will pop up.....I'll try and remember and blog about them.
Posted by a girl from oz at 21:39 No comments:

Email ThisBlogThis!Share to TwitterShare to FacebookShare to Pinterest
Labels: Australia, life as an expat, UK

Story behind the photo(s) - Swarovski Crystal Museum, Munich and Dachau 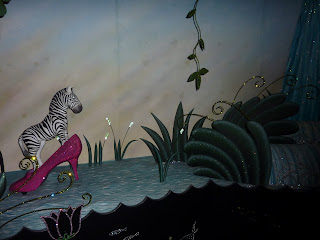 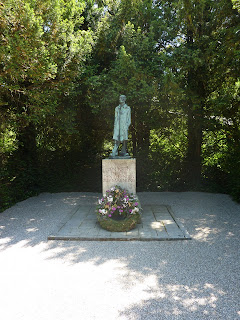 I'm choosing to talk about a couple of photos this week. They were both taken on the same day of the tour, and I think hope they represent the highs and lows of what I (and the rest of the tour) saw that day.

The first of these photographs is taken at Swarovski Crystal Museum, in Austria. The best way to describe it is not so much as a museum, but as a collection of really glitzy, slightly surreal displays, all making use of Swarovski crystals. If I remember correctly, some of the displays (such as the one in the photo) were animated as well. What also sticks in my mind from visiting there, was the attitudes of some other tourists in the gift shop.....lets just say that some people in there didn't really understand the concept of queuing....

After leaving Swarovski, the tour's next destination was Munich. Before we arrived there though, we stopped at Dachau concentration camp, which is on the outskirts of Munich. Dachau was the first of the concentration camps to be built, and was mainly for political prisoners. We were given about an hour and a half here, to spend as we wished. Some of my tourmates wandered in groups and got audio guides, I chose to look around on my own. This photograph is of a memorial on the grounds. Even as I type this today, more than 18 months after visiting the camp, I find I still cannot put the experience into words. The best I can do is to say it was humbling, evocative, and thought-provoking....an experience that I will always remember.

The last stop of the day was Munich, where we looked around the city centre, and spent the evening in Hofbrauhaus (a beer hall). From a high to a low and back to a high, it was a day that will always be with me.......what a way to spend my birthday.
Posted by a girl from oz at 20:59 1 comment:

Story behind the photo - Hopfgarten 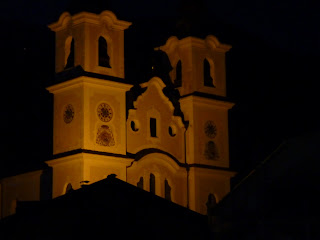 Say where? I hear you say. I think that may have been my thoughts when I heard the next stop on the tour would be this little village, in a region of Austria known as the Tyrol. As you may imagine, the region is known mostly for the outdoor activities (I think). The best way to sum up Hopfgarten is: a small village, great scenery,  not too much else to do - I don't mean it as a bad thing. There was the option for people on the tour to do some adventure activities - whitewater rafting, mountain biking, paragliding. I didn't do any of them, but kind of regret not doing the paragliding - hopefully I get the chance to one day.

This photo was taken the second night we were there (I think) looking out the window of our room where the tour was staying. It is of the church in Hopfgarten.
Posted by a girl from oz at 20:30 No comments:

Dear driver who pulled out in front of the bus I was on the other day:
Really? Did you not notice the bus approaching at all? I would have thought a great big bus was rather hard to miss, but I could be mistaken......its been a while since I've driven a car.

Sincerely,
A passenger on the bus who was very glad the bus driver was paying attention.

Dear girl on the bus who tried to purchase her fare with a 10 pound note:
Firstly, I applaud you for using public transport. Saving the environment, and cheaper (particularly at the moment) then trying to run a car (in my opinion). But, do you think it is really fair to expect the bus driver to have  enough change? Try and have some coins to hand next time.

Sincerely,
A fellow bus user who tries her darndest to have the correct fare/enough coins to hand.

Dear British Weather,
We've had words before, I know. However, I am currently grateful that you seem to be turning your attention towards more spring-like weather, with a couple of days of blue sky and somewhat warm sun. Any chance of this continuing for a while? I would really appreciate it.

Sincerely,
A girl from oz, who really appreciates the sun and blue skies.
Posted by a girl from oz at 19:56 No comments:

Story behind the photo - Venice 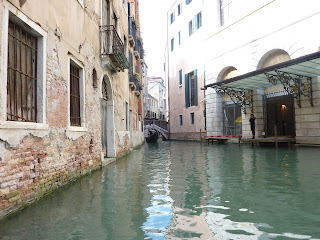 Venice. Ah, Venice. Even just typing the city name brings a big grin to my face. My mum had visited Venice as part of a trip to Europe a few years previously, and had raved about it. I had high expectations for our day here, and, I'm pleased to say, the city didn't disappoint.

We were staying on the mainland bit of Venice, so it was an early start to the day to take a boat across to the islands. I can still remember the first sight of the city from the boat....it took my breath away. And it was the start of me having an ear-to-ear grin on my face for the entire day. I remember thinking, 'I can't believe I'm here, I'm in Venice, in a city on water.....WOW' (or something to that effect, anyway)

This photo was taken while we were on a gondola ride around part of the city. It was one of the 'optional excursions' you could elect to do, as part of the tour through Europe I was on. A gondola ride in Venice - totally touristy, totally cliche, but TOTALLY worth it. The 30 minutes weren't long enough......and watching our gondolier texting on his mobile phone made the experience kind of funny too.....At the end of probably my favourite day on tour, I knew one thing - I would be back to Venice at least once while living in Europe
Posted by a girl from oz at 21:06 2 comments: