My number one rule for travel photography

As you may have gathered from previous blog posts, I like to take photos while I'm travelling. After all, how else am I going to document and remember my adventures?

I don't profess to be any great expert on photography. I only have a point-and-shoot camera (but would really really like an SLR), and, reading books, looking at websites etc, I know I have a long way to go before my photos are any good.

All that said, however, I was reminded of a very important consideration while I was away over the weekend. So important (to me), I'm declaring it my number one rule for travel photography:


Always check the charge on your spare camera battery before you go out exploring a new city.
Here's hoping I remember it next time I go away...
Posted by a girl from oz at 20:09 No comments:

In the last couple of years, I've spent a fair bit of time (and money) at the post office. I send home birthday and Christmas presents, as well as things I've purchased for my family while travelling. Listed below are just a few of the things I've learnt... 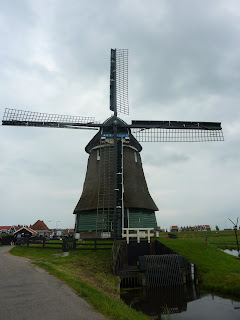 This photo was taken on the drive to Amsterdam. If I remember rightly, there is actually not all that many windmills any more in The Netherlands - I think our bus driver and tour manager made a slight detour so we could hop out and take a photo. I count myself pretty lucky to have got off the bus quickly enough to get a photo without anyone in it......often easier said than done. A windmill is a pretty cool thing to see, and like I said, one of those iconic images you really want to capture (or at least I did)
Posted by a girl from oz at 21:51 1 comment:

Things I have learnt while travelling 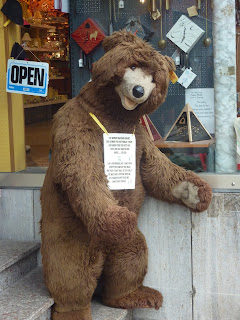 I am a brown bear and I come from Steiff the company who made the first teddy bear in the world! You may take a picture with me, but please do not touch me. Many beary thanks.
Posted by a girl from oz at 21:18 No comments:

that I probably shouldn't listen to when feeling a bit homesick.....

The Waifs are an Australian band, that I have been listening to for several years and love dearly. These two songs, however, just make me miss home just a little bit....
Posted by a girl from oz at 22:43 No comments:

Email ThisBlogThis!Share to TwitterShare to FacebookShare to Pinterest
Labels: Australia, life as an expat, missing home

Story behind the photo - Prague 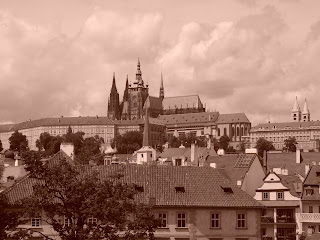 Prague was the next stop on our whistle-stop tour of Europe. We had an afternoon, and then a full day here, to explore the city. And explore I did. I walked my feet off (yet again).....at the end of the day, a group of us walked back to the hotel, and I can remember it being really hard to make myself walk back. This photo is looking back towards the Prague Castle complex, I think it was taken from the Charles Bridge (one of the main tourist attractions in Prague). The main building you can see in the background of the photo is St Vitus' Cathedral.
Posted by a girl from oz at 21:46 No comments:

You're from Canada, right? Or how I (apparently) don't sound very Australian

As I think I've mentioned before, I was born in the UK, but grew up in Australia. I've lived the vast majority of my life in Australia, and so like to think I sound relatively Aussie. I know I don't sound like Crocodile Dundee or Steve Irwin (the fact that their accent is what many international people think all Australians sound like is another rant for another day), but I had thought my accent was relatively easy to pick.

At various times, I have been asked if I am the following:

I have also been told that I look Scottish.
The most bizarre attempt at picking my accent would have to been when I went with a work colleague (who is English) to see a client. The client said that I was English and that my colleague was Australian.......not sure how they reached that conclusion, let me tell you.
And, while I was in Turkey recently (on a group tour with a bunch of Aussies and Kiwis), I was told by some that I didn't have a very strong Australian accent. This has been a common comment I get from people who don't immediately pick my accent as Australian.
I don't mind particularly if people that I meet don't get my accent straight away - it provides me with a giggle and a bit of entertainment. I would, however, find it really interesting to hear myself how other people hear me - I think it could be an enlightening experience....
Posted by a girl from oz at 22:33 No comments:

Email ThisBlogThis!Share to TwitterShare to FacebookShare to Pinterest
Labels: accents, life as an expat, musings, UK

It has been just over a week since I got back from Turkey - an amazing week, the highlight of which, for me, was attending the ANZAC Day dawn service in Gallipoli.

Most people I've met over here who aren't Aussie or Kiwi have never heard of ANZAC Day, or understand the significance it has to Australians and New Zealanders. It is difficult to try and explain, but I will do my best:

On 25 April 1915, Allied forces landed at the Gallipoli pennisula in Turkey. The intention was for the Allied forces to capture Constantinople (what is now Istanbul) and open up a sea route to Russia. However, both the landing and subsequent 8 month campaign were unsuccessful and there was high numbers of casualties on both sides. You can read more about the battle here and here

That doesn't really explain though why Australians and New Zealanders commemorate ANZAC Day. At the time of the landings (1915), both Australia and New Zealand were small, relatively young countries (Australia had only become a federated nation 14 years previously) and had very strong links to Britain. The Gallipoli landings were really the first chance both Australia and New Zealand had to 'stand on our own two feet', and it is felt that the soldiers at Gallipoli showed great courage, mateship, humour and larrikinism - what has come to be known as the 'ANZAC spirit.'

Today, on 25 April (ANZAC Day), Australians and New Zealanders remember not only those soldiers that served at Gallipoli, but all soldiers from all wars.

(just as an aside, the Gallipoli landings are also considered very significant to the Turkish people, and are remembered by them each year)

I don't think I've done a particularly good job of explaining it, but it is something that we just grow up with in Australia and New Zealand, and I can't really put it into words.....

Every year, dawn services are held on ANZAC day to remember all soldiers from all conflicts, including a service at Gallipoli. There are also services held at the Australian, Turkish and New Zealand memorial sites within the Gallipoli pennisula. I was fortunate enough to attend the dawn service, as well as the Australian and New Zealand memorial services. It was an incredibly moving experience, that I don't think I'll ever be able to express in words.

Some photos from the day:


They shall grow not old, as we that are left grow old,
Age shall not weary them, nor the years condemn.
At the going down of the sun and in the morning
We will remember them.