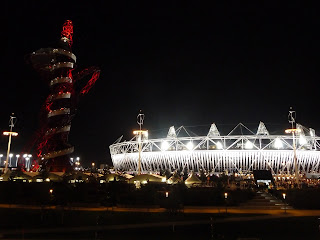 It's a year since the eyes of the world were on London for the Olympic and Paralympic Games, so this seemed like an appropriate time to share this photo. I can remember the excitement back home during Sydney 2000 - and I watched that on TV - so trying to get some tickets for London was a bit of a no brainer. I was lucky enough to get one ticket for the Olympics (fencing) and a few more tickets for the Paralympics. All the sessions I went to had a brilliant atmosphere, and just being in London during those 6 weeks was amazing as well (anyone who was here at the time will know what I mean).

This photo is taken in the Olympic Park - the main stadium is on the right, and the 'Orbit' is on the left. I took the photo as I was leaving the aquatics centre after a brilliant night of Paralympic swimming...where the crowd did their best to lift the roof off the place with the cheering! And the sound coming from the stadium as I was leaving makes me wish I had managed to get a ticket for athletics as well....

The Olympic Park is to be renamed the Queen Elizabeth Olympic Park (go here for more information). Its currently undergoing a transformation, and will be fully open in 2014. If you're visiting London before then and want to get a view of the stadium and the Orbit, then head to Westfield Stratford shopping centre, and head to the viewing area on the 3rd floor of John Lewis. You'll see pretty much the same view as above, just from a bit further away and with the Aquatics centre in the foreground.
Posted by a girl from oz at 20:11