Story behind the photo - British Museum 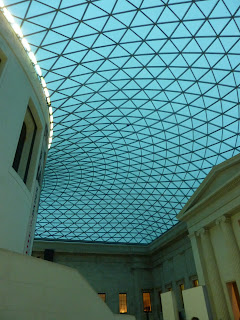 Many people (myself included), would think of London, and think 'expensive.' Since moving over here though, I've discovered (to my surprise) that this is not the case. There are some amazing museums in London, and many of them are free to visit - always a bonus if you're watching the budget.

This photo is part of the Great Court at the British Museum. The museum was started based on the collection of one man in the mid 1700's, and has expanded over the years to what it is today - after several visits, I've only barely scratched the surface of the collection. As well as their permanent collections (which are free admission), there are also regular temporary exhibitions throughout the year, these have an admission charge (in my opinion, all the ones I've been to have been worth it). The Great Court was opened in 2000, it encloses the main quadrangle at the centre of the British Museum. Depending on what the weather is like when you visit, the colour that comes through the ceiling (which is glass) can vary.

So, for people coming to visit London, would I recommend the British Museum? In a word, yes - you can easily spend many hours there. Just make sure you pick up a map, so you've got some idea of where you're going!
Posted by a girl from oz at 21:16