Story behind the photo - London (Tower of London and Madam Tassauds) 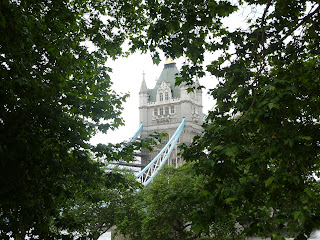 Firstly I just want to explain the title of the post: I have my photos filed by location on my computer. If I visited a few locations in one day, then I group those photos together. (just in case anyone was wondering).

After the completion of the tour, we returned to London. We had a couple of nights there (so one full day) before heading off on the next stage of our adventures - of the two friends I did the tour with, one was heading off to do more travelling before returning back to Australia, one was staying in London to look for work, while I was heading off to start my new job. On the last full day we had together, we visited the Tower of London and Madam Tassauds. Madam Tassauds - be prepared for queues, and lots of people. I would imagine if you've visited one somewhere else in the world, you don't necessarily need to visit the one in London.

This photo, however, is taken from inside the Tower of London. Best known today as one of the major tourist attractions in London, the Tower has been used a both a castle and a prison. The Crown Jewels are stored there today, and the Tower is guarded by the Yeoman Warders (Beefeaters) - it is well worth taking one of their free guided towers. Through the trees in the photo, you can see part of Tower Bridge, which is right next to the Tower of London
Posted by a girl from oz at 20:35