Story behind the photo - Cromer 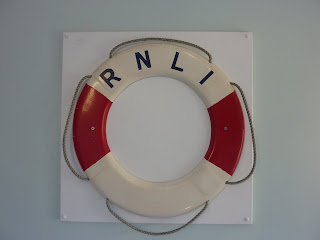 When I first arrived in Norwich, I didn't know how long I would be there for, as I didn't know how long my work contract would be for. As it turned out, I found out after 3 weeks that my contract would only be for a further 2 weeks. Wanting to make the most of the time I had left to explore the area, I asked my work colleagues where would be the best place to see the Norfolk coast, and they recommended Cromer - I was told while this was not the most beautiful spot on the coastline, it was the easiest to get to via public transport.

I visited Cromer for the day, and found it to be a pretty town. As someone who used to live on the coast back in Australia, it was definitely nice to see the ocean again - even though it was a slightly different colour to what I'm used to. There's a lifeboat museum in Cromer, which was an interesting visit, and is where this photo was taken. RNLI stands for 'Royal National Lifeboat Institution' - a volunteer charity who provide sea rescue throughout Britain. You can go here for more information about them.


(PS for anybody following along who was expecting this post yesterday, my apologies - I just couldn't get the photo to load last night, and there's not much point to the post without a photo, is there?)
Posted by a girl from oz at 19:55