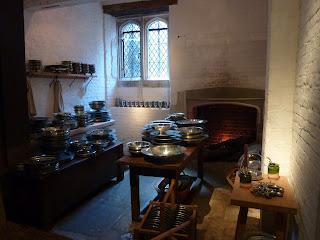 Hampton Court Palace is a major tourist attraction in London. Located on the outskirts of the Greater London area, it is easy to reach by train (you can also get there by boat I believe). The palace's best known resident would be King Henry VIII, who expanded the palace so it could be used as a principle residence. Most people, however, are probably not aware that other monarchs also lived in the palace, the most notable of which are King William III and his wife (Queen Mary II) - they also lead a period of expansion. Today, the palace is noted for having two distinct style of architecture - Tudor and Baroque. Many people may have also heard of the maze in the palace grounds - I found it easy to find the centre, a lot harder to get back out again!
This photo is part of the palace kitchens - the kitchens have been set up to look as they would have done in Henry VIII's time.
Posted by a girl from oz at 20:41