Story behind the photo - Cambridge 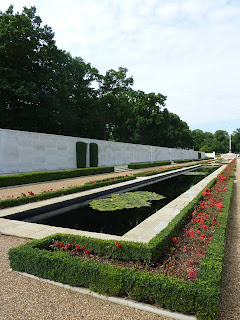 Cambridge.....home of one of the best known universities in the UK. Exploring the different colleges of the university is probably high on most people's lists when they visit Cambridge....and trying punting on the river (or, if you're me, you stand on a bridge and watch people try to punt....which can be very entertaining!).

This photo, however, is taken somewhere I bet many people would not have heard of before - I certainly hadn't. And the only reason I found out about this place is because I did an open-top bus tour of Cambridge the first time I visited there, and it was one of the stops. The place I'm referring to is the Cambridge American Cemetery.

Built on land donated by Cambridge University, the cemetery is the burial place of over 3,000 American servicemen who served in World War II. In addition, the Memorial Wall (which is on the left of this photo, the Memorial pool is the other main feature), lists the names of over 5,000 American servicemen with no known grave. I only spent about 20 minutes here (in order to get on the next open-top bus), but it gave me just a little more understanding of the scope of World War II - something I'm coming to appreciate more and more the longer I'm living here.

For more information on the Cambridge American Cemetery, go here
Posted by a girl from oz at 21:11